Leipzig, October 2nd 2014
TomTom Telematics’ WEBFLEET and ecoPLUS have won an award recognising their green capabilities at this year’s Telematik Award in Germany.

TomTom Telematics triumphed in the ECO-Telematik of the awards, organised by leading industry magazine Telematik Markt. The expert panel, an independent team with representatives from science and industry, characterised the solution as a 'compact, inexpensive system that helps companies to save fuel'. In addition, the jurors were convinced by the clear visual display of vehicle-relevant data and the 'overall concept of the entire product line-up'. 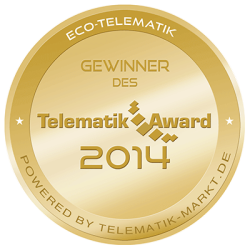 At the fourth Telematik Awards, prizes could be won in 11 categories in the field of vehicle telematics as well as in two special categories. The prizes were awarded during the IAA Commercial Vehicles trade show in Hanover, Germany (September 25 to October 2, 2014).

Partners of this year’s awards were the German Association of the Automotive Industry (VDA) and the Wildau Technical University of Applied Sciences.