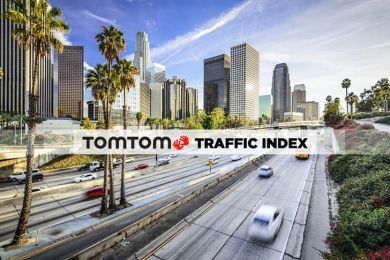 The TomTom Traffic Index has found traffic across the UK’s 25 most congested cities and towns increases the time each vehicle spends on the road by an average of 127 hours a year – more than 16 working days.1 This could equate to a cost of £767,937,2502 in time spent sitting in traffic for the 902,500 light commercial vehicles operated in these cities and towns.3

And the situation seems to be getting worse. An average journey in 2015 took 29%4 longer than it would in free-flowing conditions, up from a 25% delay in 2010.

‘Traffic congestion may be seen as a fact of life for every driver but, cumulatively, it is taking a heavy toll on the UK economy and this should not be accepted as an inevitability,’ said Beverley Wise, Director UK & Ireland for TomTom Telematics.

‘Making the most of billable time is key to profitability for any business, so organisations that rely heavily on a mobile workforce must look for ways to maximise the time employees spend actually doing jobs by minimising time spent on the road.’

‘Through smarter planning, routing and scheduling, companies can help their drivers to better avoid traffic, which could not only have an impact on productivity but also customer service. Previous research conducted by TomTom Telematics among UK van drivers found 90 per cent admit to arriving late for customer appointments – with 93 per cent citing traffic as the reason.’ The biggest financial hit was felt in London, where £237 million is lost to traffic each year, followed by Manchester (£157,729,390) and Birmingham (£81,364,800).

Wise added: ‘Telematics solutions can help businesses mitigate the effect of traffic congestion and minimise time spent on the road. Firstly, drivers can be navigated along the fastest routes based on anticipated congestion spots and traffic information. But the data provided by telematics, including GPS location, ETAs and job status, can also be used to inform smarter planning where daily schedules are optimised to help ensure the most appropriate driver is sent to each job at the most appropriate time.’

1Based on an average working day of 7.84 hours. According to the ONS the mean average number of total paid hours per week for full-time employees in the UK was 39.2 in the year to April 2016.

2This figure was calculated as follows:
UK average of 127 hours lost in traffic x £6.70 (National Minimum Wage, 2015 for workers 21 and over according to UK government statistics) x 902,500 light goods and heavy goods vehicles operating in the 25 cities identified by the TomTom Traffic Index as the UK’s most congested (according to vehicle licensing stats from the DVLA) = £767,937,250.

3According to vehicle licencing stats from the DVLA/DfT, by the end of 2015 there were 902,500 light goods vehicles registered for use on the roads in the 25 cities and towns identified by the TomTom Traffic Index as the UK’s most congested in 2015.

4An overall congestion level of 29% means that an average trip takes 29% longer than it would under uncongested conditions, for example at night.