London, September 25, 2012
Ninety-two per cent of British consumers have suffered tradesmen and delivery firms turning up late for appointments, independent research has revealed. 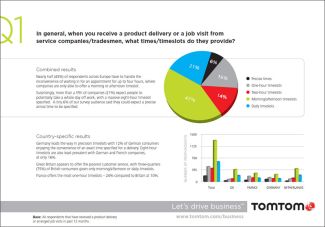 According to the TomTom-commissioned study, conducted by global research consultancy TNS, more than a quarter claim to have experienced poor punctuality on a regular basis. Furthermore, 73 per cent of those questioned say they are frequently kept in the dark about delays.

“Good customer service will differentiate a company from the competition in any economic climate, in a recession it can mean business survival” said Thomas Schmidt, Managing Director, TomTom Business Solutions.

“Clearly companies are failing to meet expected levels of service, with factors such as traffic and a lack of fleet management information contributing to regular late arrivals and unsatisfied customers”

The study also revealed that 96 per cent of British consumers are not typically given precise appointment times by delivery and service companies, with three-quarters usually being given morning or afternoon timeslots at best.

Customers have expressed their frustrations with 60 per cent believing these four-hour timeslots are unacceptable. In fact a quarter of those interviewed said unspecified appointment times are the biggest failing of service and delivery companies.

According to the study, 78 per cent of consumers said they would be less likely to use a company again that failed to give precise or acceptable appointment timeslots. A further third (34 per cent) believed service standards (punctual deliveries and job attendance times) have deteriorated since the global economic downturn.

Advanced fleet management systems calculate mobile workers' journey times, based on live and historic traffic information, enabling companies to more accurately plan job schedules. It also enables jobs to be allocated by office-based managers to the most appropriate workers – based upon quickest arrival times – not simply to those who are closest to customers.

“By boosting service and better managing expectations by communicating reliable ETAs, companies will minimise customer frustrations, culminating in a better experience for them and a strengthening of their business reputations”