Webfleet websites and services need to be able to store and retrieve information to provide you with the service or information you asked for. For example your language setting and username for logging in. This is done through functional cookies. This storage and retrieval of information only happens when you use such a service. As these cookies are needed for a well-func­tioning website and to deliver the service they will be placed on your device. Further we use site analytic cookies. We use Google Analytics, Google Optimize, Hotjar, and Google Tag Manager to collect site analytics to constantly improve our website.

Cut costs, boost efficiency and increase safety with visibility on your fleet. Take advantage of our LINK 340 offer and track your assets in real time. 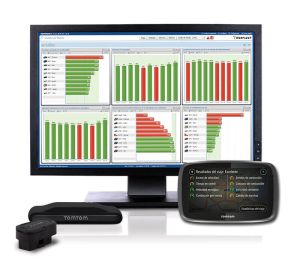 The move will give companies in both countries access to TomTom’s innovative fleet management technology, which can help them to improve operational efficiency and become more competitive.

“Mexico City was revealed as the second most congested large city in the world in the last TomTom Traffic Index,1 while authorities in Santiago de Chile announced the city’s first environmental emergency in 16 years in June due to high smog levels.2 WEBFLEET provides greater visibility into fleet operations, combining professional navigation and world-class traffic information with award-winning driver improvement technology to help business drivers spend less time on the road and to use less fuel.”

“With more than 8 million commercial vehicles in operation in these countries and telematics penetration of around seven per cent,3 both Mexico and Chile represent attractive market opportunities for TomTom Telematics,” added Cañestro.