Fleet management solution for your fleet in Belfast

Are you looking for a fleet management solution for the Belfast region that provides you with real-time information about the location of your vehicles? Do you also want to communicate directly with your drivers, dispatch jobs, track a mileage logbook, improve driving behaviour and save on fuel? Our vehicle tracking and Active Driver Feedback help you with this challenge in a busy city like Belfast. 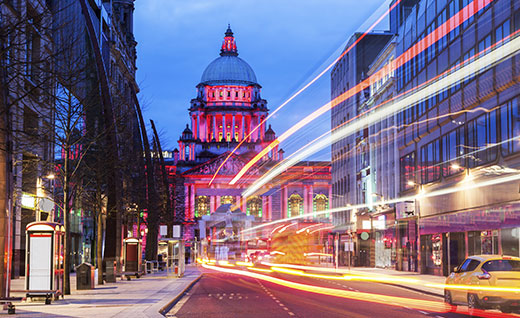 Belfast is the capital and largest city of Northern Ireland (and second largest city on the island of Ireland). Located on the banks of the River Lagan, it is an important port for both cargo and passengers. The iconic yellow gantries of the Harland & Wolff shipyards are a reminder that this was the birthplace of the Titanic. Today, Belfast is the beating heart of Northern Ireland – commer­cially and culturally. Queen’s and Ulster universities enjoy very high reputations while music and theatre paly a big role in Belfast life in venues like the Waterfront Hall. 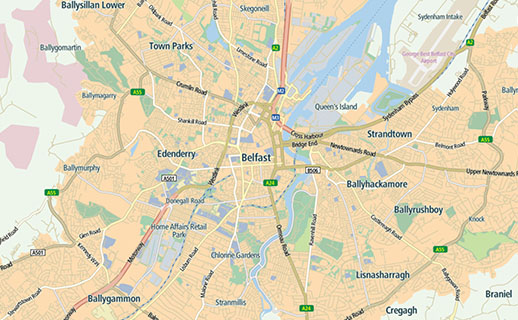 The challenges your drivers & vehicles face in Belfast

According to Wikipedia, Belfast is a relatively car-de­pendent city by European standards with 77% of all journeys made by car in 2005. An extensive network of roads includes links to the M1 and M2 which take drivers north and south of the city. Other major routes such as the A2, A22, A24, A55 and A512 connect with Belfast’s suburbs and outlying districts such as Cultra, Carryduff, Ardoyne and Dunmurry. As the most highly populated city in Northern Ireland, with a population of over 300,000, Belfast is partic­u­larly busy and presents unique challenges to drivers.

Why is a fleet management solution partic­u­larly useful in a congested city like Belfast? Due to heavy traffic during the day and specifically in peak hours, each vehicle spends about 43%¹ more on the road (a total of 1,767 miles¹ in and around the city). That means an average commercial vehicle driver wastes more than 200 hours¹ per year while sat in traffic. Translate that into an approximate loss of £14,256,000² for businesses in the Belfast area, and you have your answer.

Some of the disctricts around Belfast where Webfleet Solutions is active: