Fleet management solution for your fleet in Leeds

Are you looking for a fleet management solution for the Leeds region that provides you with real-time information about the location of your vehicles? Do you also want to communicate directly with your drivers, dispatch jobs, track a mileage logbook, improve driving behaviour and save on fuel? Our vehicle tracking and Active Driver Feedback help you with this challenge in a busy city like leeds.

Sitting on the banks of the River Aire, Leeds is the largest city in West Yorkshire. A major centre for the wool industry during the Industrial Revolution, it is now an important financial centre with more than 30 national and inter­na­tional banks including First Direct and Yorkshire Bank. It is also home to leading companies such as ASDA, Aviva and Telefonica Europe. Hotspots include the redeveloped Call Lane area with its eateries and bars as well as the Royal Armouries and the bustling Kirkgate market with its indoor and outdoor stalls. 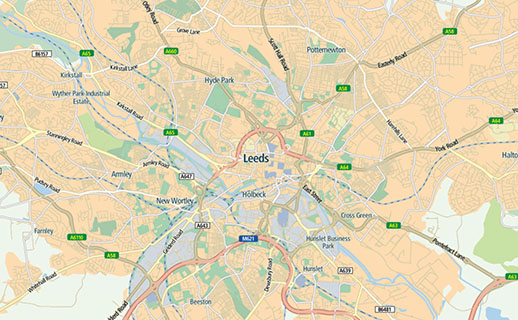 The challenges your drivers & vehicles face in leeds

Leeds is one of the principle hubs of the northern motorway network and the starting point for the A62, A63, A64, A65 and A660 roads. It is also the endpoint of the M1 coming up from London and stands at the middle of the M62 going east-west. Apart from the road network, public transport and rail services converge on the city and link outlying districts like Horsforth, Whinmoor, Morley and Hunslet. This concen­tration of transport can pose challenges especially when it comes to getting around the city centre. Leeds is also an important university town with no fewer than four major insti­tu­tions including the University of Leeds. Very much a “student city” its population is swelled greatly by its student population especially in the Headingley area.

Why is a fleet management solution partic­u­larly useful in a congested city like Leeds? With its many different transport options (which include the inter­na­tional Leeds Bradford Airport), Leeds is a great base for business but it can be a victim of its own success. Navigating around the centre or to outlying suburbs can be tricky sometimes. Due to heavy traffic during the day and specifically in peak hours, each vehicle spends about 26%¹ more on the road (a total of 6,112 miles¹ in and around the city). That means an average commercial vehicle driver wastes more than 118 hours¹ per year while sat in traffic. Translate that into an approximate loss of £58,282,560² for businesses in the Leeds area, and you have your answer.

Some of the disctricts around leeds where Webfleet Solutions is active: