Fleet management solution for your car fleet in Manchester

Are you looking for a fleet management solution for the Manchester region that provides you with real-time information about the location of your vehicles? Do you also want to communicate directly with your drivers, dispatch jobs, track a mileage logbook, improve driving behaviour and save on fuel? Our vehicle tracking and Active Driver Feedback help you with this challenge in a busy city like Manchester. 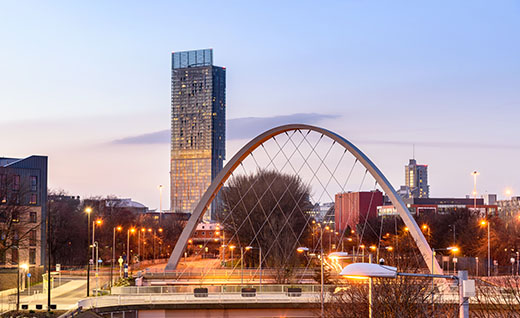 Manchester, in the north west of England, is a large city famous for its two Premier League football teams, its cultural output and industrial heritage. Areas once busy with industry (partic­u­larly textiles) have now been redeveloped with attractions like the Imperial War Museum North at Salford Quays which is also a hot bed of digital, creative and media companies. Almost half of the North West’s Top 500 businesses ranging from financial and legal services to bio tech and advanced manufac­turing have made their homes here. 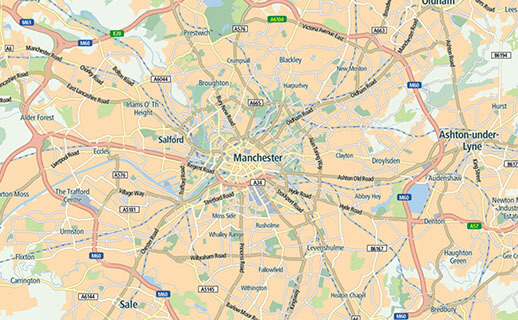 The challenges your drivers & vehicles face in Manchester

Manchester is one of the UK’s most congested cities. Key routes include the M60 Manchester ring road which provides relatively good access to outlying areas including Salford, Sale, Didsbury and Cheetham Hill but can become extremely busy at peak times. The A57 inner ring road (including the Mancunian Way) creates an effective east-west link to the south of the city centre. Other important routes include the southbound A34 and A56 Bury New Road. A wide choice of motorways including the M56, M61, M62 and M66 provide good access to cities around the country. The M6 is also easily reached to the west of the city.

Why is a fleet management solution partic­u­larly useful in a congested city like Manchester? Due to heavy traffic during the day and specifically in peak hours, each vehicle spends about 38%¹ more on the road (a total of 7,407 miles¹ in and around the city). That means an average commercial vehicle driver wastes more than 169 hours¹ per year while sat in traffic. Translate that into an approximate loss of £169,256,880² for businesses in the Manchester area, and you have your answer.

Some of the disctricts around Manchester where Webfleet Solutions is active: