Fleet management solution for your fleet in Glasgow

Are you looking for a fleet management solution for the Glasgow region that provides you with real-time information about the location of your vehicles? Do you also want to communicate directly with your drivers, dispatch jobs, track a mileage logbook, improve driving behaviour and save on fuel? Our vehicle tracking and Active Driver Feedback help you with this challenge in a busy city like Glasgow. 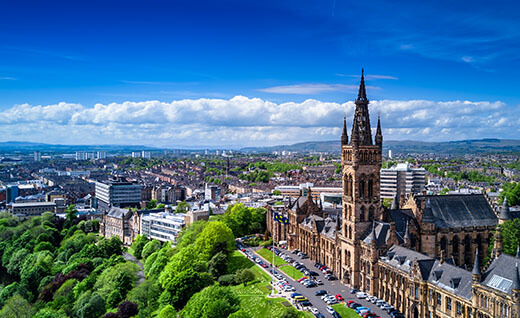 Located on the River Clyde, Glasgow is Scotland’s most populous city with around 600,000 people. It features rich Victorian and art nouveau archi­tecture as well as being home to cultural insti­tu­tions like Scottish Opera, Scottish Ballet and the National Theatre of Scotland. Glasgow boasts four universities as well as the Glasgow Science Centre – a purpose-built science centre and Scotland’s most popular paid-for tourist attraction. The SEC Centre is Scotland’s largest exhibition centre staging all kinds of world class commercial and cultural events. 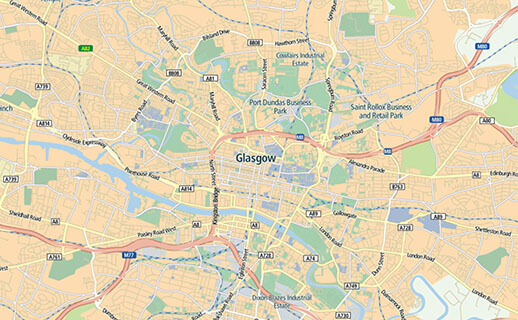 The challenges your drivers & vehicles face in Glasgow

Spread over 70 square miles, Glasgow is a thriving and busy place with one of the highest population densities of any town or city in Scotland. Its districts include Renfrew, Paisley, Clydebank, Cambuslang and the famous Gorbals area. The M8 motorway links Glasgow to Edinburgh and joins the M77, M73, M74, M80 and A82 in making the city a major transport hub. The busiest motorway in Scotland, the M8 is 60 miles (97 km) long, crossing the River Clyde on the Kingston Bridge – the busiest in Europe. Glasgow is also served by three inter­na­tional airports – Glasgow Airport, Glasgow Prestwich Airport and Edinburgh Airport.

Why is a fleet management solution partic­u­larly useful in a congested city like Glasgow? Given the concen­tration of transport options and the large population, navigation around the city is not always easy. Due to heavy traffic during the day and specifically in peak hours, each vehicle spends about 29%¹ more on the road (a total of 5,010 miles¹ in and around the city). That means an average commercial vehicle driver wastes more than 129 hours¹ per year while sat in traffic. Translate that into an approximate loss of £22,755,600² for businesses in the Glasgow area, and you have your answer.

Some of the disctricts around Glasgow where Webfleet Solutions is active: